The Center was accredited to ISO 17025:2005 by China National Accreditation Service (CNAS) in 2008 and passed the re-assessment and expansion assessment in 2011. It is a national-level third-party calibration laboratory (NO.CNAS L3330) and has the qualification of international mutual accreditation. The calibration certificates issued by the Center are recognized internationally and are valid for API audit. 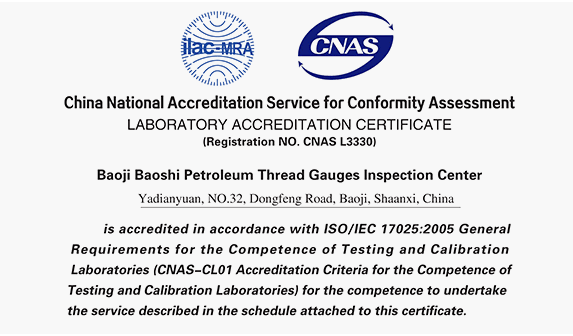 The Center is endowed with powerful technological resources. The experts team of the Center consists of Xufeng Duan, Dexiang Tong, Zhonghai Ma, Yurang Li and Guifen Ran. Some of them are in charge of drafting national standards for oilfield drilling tools connection threads and measurement and calibration norms for gages, and take part in drafting measurement and inspection regulations of China National Petroleum Corporation. They have rich experiences of designing, manufacturing, inspecting and supervising OCTG thread gages for over 40 years.

The guidelines of the Center is "scientific, just, accurate and timely". The Center will offer on-site calibration services or the customer can send the gages to the Center for calibration.

Founded in 1955 as a non-profit institution for public service, the National Institute of Metrology (NIM) is China’s highest research center of metrology and the national technical center of legal metrology, affiliated with the General Administration of Quality Supervision, Inspection and Quarantine (AQSIQ). Since it was founded, NIM is committed to pushing back the frontiers of metrology science and providing accurate, reliable and traceable measurements in support of China’s economic growth and social sustainability. Our main tasks are as follows:

• conduct research on fundamental metrology and applied metrology to satisfy the demands of economy and society.

Currently, NIM has about 760 staff members, including 2 members of the Chinese Academy of Engineering, 284 researchers, among which, 116 are PhDs.

NIM maintains 127 primary standards, 258 national standards and provides over 1062 types of reference materials (354 of them are of national level). NIM has 873 Calibration and Measurement Capabilities (CMCs) published in the BIPM KCDB. In 2011, about 130,000 sets of instruments were verified and calibrated at NIM.

In 2011, NIM has greatly enhanced its bilateral cooperation with foreign NMIs by launching a number of joint research projects and carrying out bilateral and multilateral comparisons in various fields, which has laid a solid foundation for NIM’s future development.

In the national Twelfth Five-Year Plan period (2011-2015), NIM will adhere to the national principles of developing science and technology, and take serving national economical and social development as our core mission. The three priority tasks of NIM are: to improve fundamental research, to support national strategy and to upgrade measurement and service capabilities. The great emphasis will be laid on developing new fields of metrology which will support emerging strategic industries of China. NIM will aim at optimizing organizational structure, facilities construction, scientific and technological collaboration, human resource development, and the adoption of new mechanism that encourages innovation. The vision of NIM is to become a world-class NMI which is able to contribute more to establish a wealthy country.